The September Jobs Report: Walloped by Hurricanes, but Only Temporarily

Excerpt:  While the September jobs report came in worse than expected, at a loss of 33,000 jobs versus the expected approximately 80,000-job gain, the difference is largely due to work disruptions caused by hurricanes in Texas and Florida. Once those disruptions cease, the jobs picture is expected to be strong, with post-hurricane rebuilding likely to spur economic growth in those areas.

The September jobs report was, on the surface, bleak. The Bureau of Labor Statistics (BLS) indicated that the economy had lost 33,000 jobs versus an expected roughly 80,000 gain, the first dip in job growth in seven years and an abrupt end to 83 consecutive months of steadily increasing jobs.

Hurricanes in both Texas and Florida affected the jobs report.

But in fact, the loss was due to work disruptions caused by the mammoth hurricanes that hit Texas and Florida. Job losses showed up most strikingly in restaurants, bars, and other food services, precisely the places that close down when a storm hits.

Hurricane Maria, which hit Puerto Rico, will not show up in the BLS’s report because the island is not included in the surveys.

The BLS’s business survey tabulates workers who didn’t receive a salary during the month as unemployed. However, it is likely that workers whose place of employment was closed down because of storms or hurricane damage will be back at work once the damage is repaired.

In addition, several news sources pointed out that the post-hurricane necessity of repair, rebuilding, and reconstruction in many hard-hit places may spur employment in coming months. 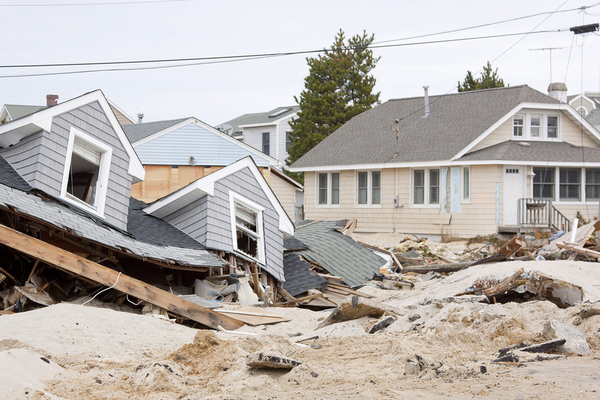 Future rebuilding after the hurricanes may increase jobs.

The current employment news is good on many fronts. The percentage of employed Americans is at the highest level since 2009, and has been climbing continually over the past seven years. As the Wall Street Journal noted, the figures are not consistent with what would be found if the jobs report was heralding a recession.

…While the Unemployment Rate Drops

The good news is underscored by another BLS report: the U.S. unemployment rate was down in September, to 4.2% from 4.4%.

How can an unemployment decrease even as joblessness is reported to climb upward? As Fortune points out, it’s a function of two different surveys.

The BLS’s Household survey measures long-term employment data and is conducted, as its name implies, in U.S. households. The Business survey, on the other hand, measures data reported by employers, and is designed to measure monthly payroll, and thus reveal growth or shrinkage in who’s being paid.

From August through September, the number of jobless Americans dropped by 330,000, the number that accounts for the 0.2% drop in the unemployment rate.

How Experienced Loan Advisors Can Help Your Portfolio

As the September jobs report shows, bad economic news in one month can be a harbinger of good economic news in coming periods. For banks, the lesson is clear. There will always be reasons to adjust a portfolio, whether the change needed is selling nonperforming loans or purchasing high quality ones.

At Garnet, we’re here to help your portfolio move in any direction it needs to go. Register for our online portfolio auction system today.